A moment of update :D

Just for everyone's info, I am no longer working in Putrajaya. I've moved back to my hometown in Kota Kinabalu since July last year (of which most aren't still informed of the fact except for few good friends and family) and it feels so damn good :D.

The only downside (for me :p) was I had to live with my parents for several months before moving into my own place. It's not that I dislike my parents or family for that matter, it's just that I am much more comfortable living all by myself.

Well, the other reason is that, my sister just gave birth several months back and my cats' presence aren't welcome there, so by hook and by crook, I had to leave...not that it matters much :). Just a few updates, I now have 3 adult cats staying with me and with the recent birth of a kitten, that makes four feline companions.

I think that's all for now and will be actively blogging again..hopefully..and this time, nothing about politics or animal rights or human stupidity unless I'm really bugged by them. It's back to square one where I'll be chronicling the journey of my non-exciting single life! :D

Been a long while since i posted something here.... Just be glad to know that, i love my life and i love the people who could except the loner being as i am. Most of all, i love the 5-day a week working hours. Makes a lot of difference. And fyi, humans are freakin predictable haha. Just to reiterate, i love my life...especially the bad because that makes who we are :)
Posted by JerryInc at Saturday, October 20, 2012 2 comments:

to put it short, i WAS in a good mood. so good that i thought of updating this dust ridden blog...that was until i finished reading about the mentality of the people in this country and its political scene. feels like living in a backwater with monkeys occupying the land but instead of living on trees, these monkeys are slightly clever to be living in concrete abodes.

to be fair, Malaysia is a great country. we just need to get rid of the old timers and conservative thinkers who are leading the people.

time have changed, these people should too, together with their crap.

call it stress or call me crazy...either one, agitation and annoyance ruled the day and strangely enough for no apparent reason.

ok, i lied. there was a reason, but it was too trivial and random that it couldn't possibly be the source of my restlessness.

simply said, i woke up despising humans for their weaknesses and wished that i was never 'brought' to this world. can't help but feel like i was way better off in the imaginary land where everything was peaceful and the two moons shined.

what triggered the unexpected emotion? not sure, but i'm pretty certain it had something to do with all the reported cases of animal cruelties.

i should stop caring about anything for the time being and keep my empathy in check.

getting over a loss...

As mentioned in my previous post, i 'ignorantly' ran over a kitten. it has been a couple of days now and i am still haunted by my action.

i can't stop thinking of how frightened the kitty looked when it ran under my car and the bump when i ran over it. i can't shake off my mind that the only reason it stopped running was because it expected me to alight from my car, pick it up and provide it the security it needed but instead was run over by my ignorance.

the worse part is, i started doubting if i left the kitty at the grove possibly alive. pretty sure it was dead though, the eyes were bulging and i couldn't sense any movement at all...but what if i was wrong? what if the kitten was only unconscious? what if....

yeah..the thought keeps playing in my head like a broken record, and it's all too clear when my hands are on the steering wheel. obviously the guilt hasn't left me, furthermore, it felt like there was something missing...

it was mentioned that the kitty was laid to rest in a grove, but that's just one part of the truth. what i didn't mention was, i left it in the open under a tree. i know it wasn't right, but there wasn't any tools around to dig a grave.

after work today, i was compelled to return to its resting place half hoping that a miracle occurred and find the kitten alive...injured but alive.

reality sucked, all i found was its remains all bloated up but without any foul stench. i stayed there for a few minutes and stared at it while trying to figure out what exactly was missing..nothing, not even a single thought came into mind.

i returned to my car, lit up a ciggy and just stared blankly into space...and it hit me, i knew the reason why i felt something was missing and it was a name! to some, this may sound silly..even dumb.

you may argue that a rose by any other name would still smell as sweet. without a name the rose would only be known as a flower but given a name, the flower now has a specific form that we can associate with. in other words, we remember the flower because it is called the rose.

that's what i did...i gave the kitten a name and called it 'Manangkus' which means 'running' in our Kadazan-Dusun language for the obvious reason. right then, i felt like a burden was lifted off my shoulder. call it strange, weird or whatever you want, i just don't care.

so, RIP Manangkus. the next time if i (ever) adopt another stray that looks somewhat like you, i'll honor it with your name.
Posted by JerryInc at Thursday, March 08, 2012 No comments:

grieving for a loss...

today, i ran over a kitten. the sound of its final yelp when my tyre crushed its skull and its spastic movements leading to its death is going to haunt me for a very long time.

i'd like to say it was an accident and i shouldn't feel too bad about it...but the thing is, it was my ignorance that led to the accident. maybe i wouldn't feel as bad if it happened on a busy highway, unfortunately it happened at a red light.

the kitten went under my car and i should've checked before driving off when the light turned green. i shouldn't have cared about what the drivers behind would think or do if i had just taken a moment to stop and look...in other words, i am to be blamed for what had happened.

i looked into the rear view mirror and there it was the kitten writhing in pain on the road. i immediately stopped my car, something i should've done earlier, got out and ran about 10 meters to where the kitten was. there were no second thoughts, i picked up the kitten disregarding its bowel excrement, ran back to the car and sped off thinking i might be able to reach the vet which was 20km away all the while hoping that its injury wasn't fatal...but deep down i knew it wasn't going to make it or rather, i wasn't going to reach the clinic in time. bragged as Malaysia's administration center with all the hype of being a peaceful, harmonious and green city, it's sad that Putrajaya lacks any veterinary services.

5 minutes later, the kitten stopped moving and it felt like my world came crashing down.

i'm not much of a crier but my tears swelled up in my eyes and dried up before they had a chance to fall. after 15minutes of driving aimlessly, i found a grove and laid its tiny feline body to rest.

i wish i could turn back time and do the right thing.

in memory of: steve jobs

i wanted to write about psychopathy and sociopathy from my own perspective, but that would have to wait since today is a sad day for most people (techies especially). Steve Jobs, the co-founder of Apple, an entrepreneur and inventor passed away at the age of 56.
normally, the deaths of prominent people don't affect me much or at all regardless of whether they are religious figures, celebrities or politicians simply because (in my opinion) they have reached a point where they can't do anything much aside from what they've already done (yeah shallow, i know...) so losing them isn't exactly a loss. in other words, they've accomplished their task.

when i read the news on steve job's demise, a feeling of loss crept in and the weird part is that i'm not even a fan of him or do i follow up on his activities...i don't even own any iphones, ipads, ipods or other apple products! what i felt in that instant was, a loss of a great man with a great mind who (if he was alive and well) could bring in new inventions and innovations to a higher level!

but then again, he has done a lot during his lifetime and (probably) left the world without regret. He was also (probably) loved and respected by many.

so ask the question. who are we and what can we do to change the world? 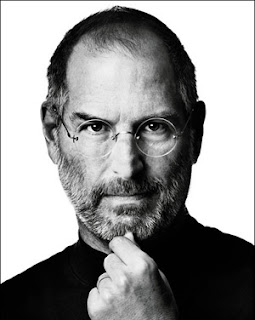 RIP Steve Jobs. you will be missed.

JerryInc
Kota Kinabalu, Sabah, Malaysia
A guy who tries his best to pretend he doesn't care, but always fails each time...owh well, the hell :D